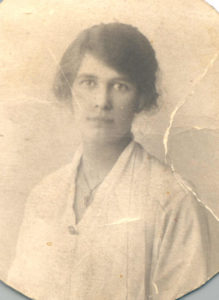 Agnes (Warrior) Wiebe was born on September 12, 1894, to a working-class family in West Ham, England. Before 1915, Agnes was “in service,” likely working as a maid to a middle-class family. In 1915, she went to live with her mother’s sister Mildred, a widow, who needed help running a canvas business making tents and awnings.

At the end of World War I, Mildred moved to Australia but Agnes chose to go to Canada with her brother Reginald Warrior, where the opportunity for a better life awaited them both. Reg joined the Alberta Provincial Police (APP) and came to Fort Saskatchewan to serve at the APP detachment in town in the 1920s.

Agnes lived with Reg in the Fort Saskatchewan Courthouse until 1928, when Reg decided he wanted to marry Rose “Bea” Adamson, the daughter of James B. Adamson, a local real estate agent. Reg asked his friend Jack Wiebe, a justice of the peace living in Bruderheim, to marry Agnes.

Agnes was upset about the arrangement at first as she did not really know Jack and felt that she had no choice in the matter. Nevertheless, Agnes agreed to go on a date with Jack, and after only the one date, they were married on December 8, 1928, at St. Faith’s Anglican Church in Edmonton. As it would turn out, Agnes and Jack were a fitting match. They had much in common and would become devoted to one another over the course of their marriage.

The first year of their marriage coincided with the stock market crash on Black Tuesday, October 29, 1929. Jack lost quite a bit of money in the market crash, but the year would end on a positive note as the couple welcomed their first child, Joan, on December 30th. During the 1930s, and until the 1950s, Agnes helped Jack run the Fort Agency, a registry, and insurance agency. Jack also worked for the Prairie Farm Rehabilitation Agency during the depression and Agnes volunteered with the local Women’s Institute chapter. 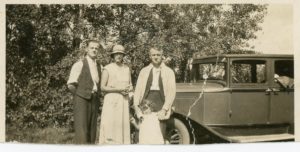 The 1930s would bring hardship beyond the economic woes of the Great Depression for the Wiebes. Agnes developed cancer and to pay for the treatments Jack sold off some property. The lawyer overseeing the sale stole the proceeds by cashing a bearer instrument, a type of fixed income security with no ownership information on the certificate. Fortunately, Bishop Burgett, a family friend, came to their aid and paid for Agnes’ cancer treatments. Jack would spend many hours sitting with Agnes, reading books to her to pass the time.

Agnes managed to beat cancer but World War II would bring more hardships for her and Jack. During the war, many Canadians treated German immigrants, and families with German-sounding names, with suspicion and hostility. Agnes and Jack took in family friend Elsa Arp after the Canadian government sent Elsa’s husband Edward and son Otto (Otto had lived with Reg and Agnes in the Courthouse in the 1920s) to internment camps at Kananaskis, BC, and Fredericton, NB. The Wiebes believed Elsa would not be safe alone on her farm and brought her to live with them.

Due to taking Mrs. Arp into their home, and their own Germanic-sounding name, many of the Wiebes’ friends avoided them during the war, and children bullied Joan at school. Neighbours would shine their car lights on the Wiebes as a form of intimidation.

Despite being ostracized by the Fort Saskatchewan community during World War II, Agnes was well-liked and in high demand for her wit at local parties. She was smart, popular, and believed in community service and helping others. She combined these attributes in the 1950s with a lifelong interest in politics and entered a bid for a seat in local government. In March 1953, she became the first woman elected to Fort Saskatchewan’s Town Council with 169 votes, the most anyone had received at that point. Unfortunately, Agnes’ political career would be cut short. On January 5, 1954, she died of a heart attack.